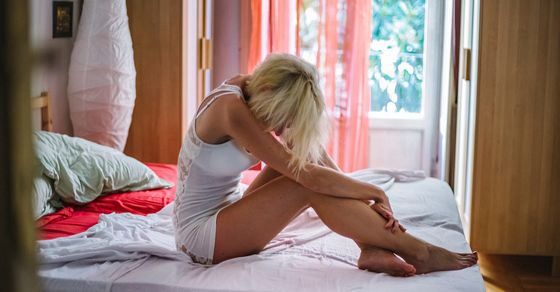 Depression needs to be treated like a physical illness — not a mental disability. With “mental disability” comes a stigma of weakness. So it’s understandably something people have trouble admitting they have. But would people be less ashamed of their depression if it was regarded as a bodily condition? Because that’s exactly what it is, according to a growing number of scientists.

George Slavich, a clinical psychologist at the University of California in Los Angeles told theGuardian, “I don’t even talk about it as a psychiatric condition any more. It does involve psychology, but it also involves equal parts of biology and physical health.”

In other words, depression has just as much to do with the body as it does with the mind.

It seems kind of obvious once pointed out, but when people are sick, they show classic signs of depression: lethargy, apathy, and an inability to get one’s self off of the couch. So could there be a common cause for both depression and feeling physically ill? Recent research says yes. It’s inflammation.

Research has shown that healthy people can be temporarily put into a depressed, anxious state when given a vaccine that causes a spike in inflammation. A family of proteins called cytokines sets off inflammation in the body, and shifts the brain into sickness mode.

Both cytokines and inflammation have been shown to rocket during depressive episodes and to drop off in periods of remission in bipolar people.

Another researcher Turhan Canli of Stony Brook University in New York believes infections are the most probable culprit behind inflammation, going as far as to say that we shouldrebrand depression as an infectious — but not contagious — disease.

However, infection is not the only way to incite inflammation. A diet rich in trans fats and sugar has been shown to promote inflammation, and obesity is another risk factor because body fat, particularly around the belly, stores large quantities of cytokines.

It seems like depression is some sort of allergic reaction to our own lifestyles. Stress, especially the kind induced by social rejection or loneliness, also causes inflammation. We’re literally eating, drinking, and isolating ourselves into inflammatory — and therefore depressive — states.

There is hope, though. We can change our diets to reduce this inflammation (though we shouldn’t rid ourselves of it entirely because our immune system needs it to fight off infections). Plus, the clinical trials conducted so far have found that adding anti-inflammatory medicines to antidepressants not only improves symptoms, it also increases the proportion of people who respond to treatment, but more research needs to be done on this.

Carmine Pariante, a psychiatrist at Kings College London, said that in between five to 10 years there may be a blood test that can measure inflammation in people with depression so that they can be treated accordingly.

Maybe it would help, too, if people didn’t look down on those suffering from depression, if people could have a little more sympathy for others. Inflammation is a condition that rears its ugly head in every person at a given time. If depression could be thought of as something as common and inevitable as inflammation, maybe we’d all be more understanding.